Team Weston would like to share this message with you, written by Kael and sent to all our volunteers as part of our internal newsletter. Our 140+ volunteers form the energetic outreach center of this campaign—calling, texting, spreading our message days-into-evenings and week-after-week, across a district that is almost half the state of Utah.

We also appreciate how many of you have contributed in important ways: talking to friends and neighbors about Kael, writing Letters to the Editor, boosting our posts and posting your own on social media, or donating. You are part of Team Weston as well, so we would like to share this special update with you.

Well, we are one week away from Election Day—and only a few days before Halloween. With COVID-19 at all-time highs in Utah and in other states across our country, too many families continue to suffer for failed public health policy and dysfunctional government. Voters often start conversations with me about COVID and express how fearful they remain, particularly with the Affordable Care Act under review by the Supreme Court next month.

Below is a quick update on how I see the campaign and our most recent events and travel. Your hard work and commitment have gotten us to a point where voters know the difference between the incumbent and me. As hundreds of thousands of them vote (more than a hundred thousand already have), I am grateful we have made this a real race—one that is winnable—based on important policies that help the lives of real people.

In late September, with your help, we held a number of town halls across northern Utah, including in Salt Lake’s west side, Bountiful, and Farmington, as well as in Washington County. These gatherings were outside in parks, masks required. All had good turnout, particularly in Bountiful. Voters’ concerns centered on COVID, related job issues—no second round of economic relief from Congress—the environment/climate, equality and rights, as well as a question from an atheist about church-state relations in Utah.

Most rewarding in these interactions is how voters interact with each other. Not all who attend are Democrats. I continue to hear from disaffected Republicans, including a former Trump supporter (he said he’s voting with us this year), and unaffiliated voters. One mother spoke about how to engage young people, who were focused on social justice issues and Black Lives Matter. A self-described Libertarian asked about how to improve voting by those who believe both parties have failed to address important issues. One voter described, powerfully, how she could only get healthcare if she and her family paid in cash. These are the voices that I record in my yellow notepads and put to memory in order to think of ways to address their needs—protect the ACA, for one, and make sure that the U.S. does not further politicize public health, such as the wearing of masks. 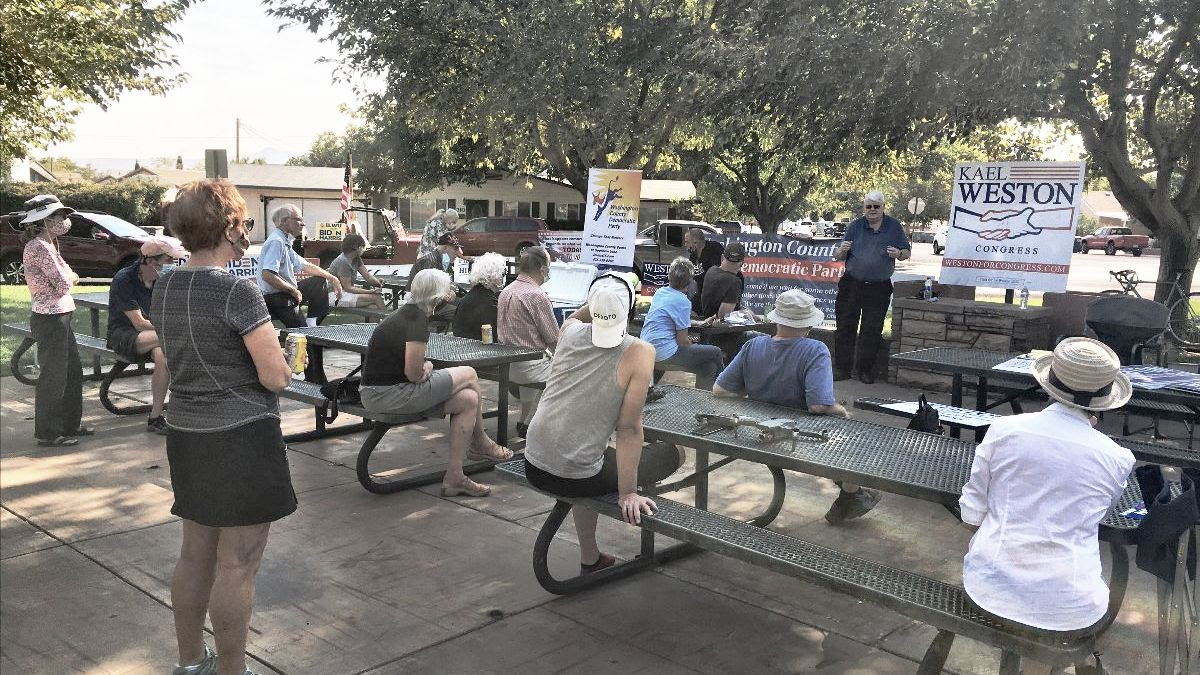 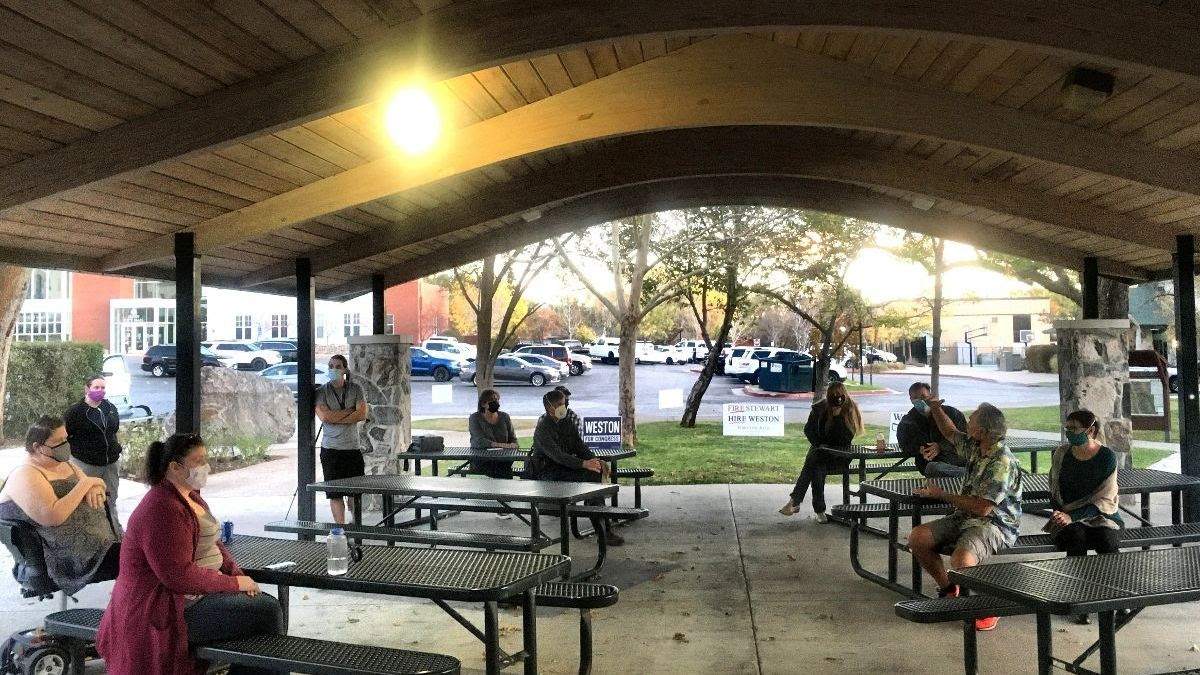 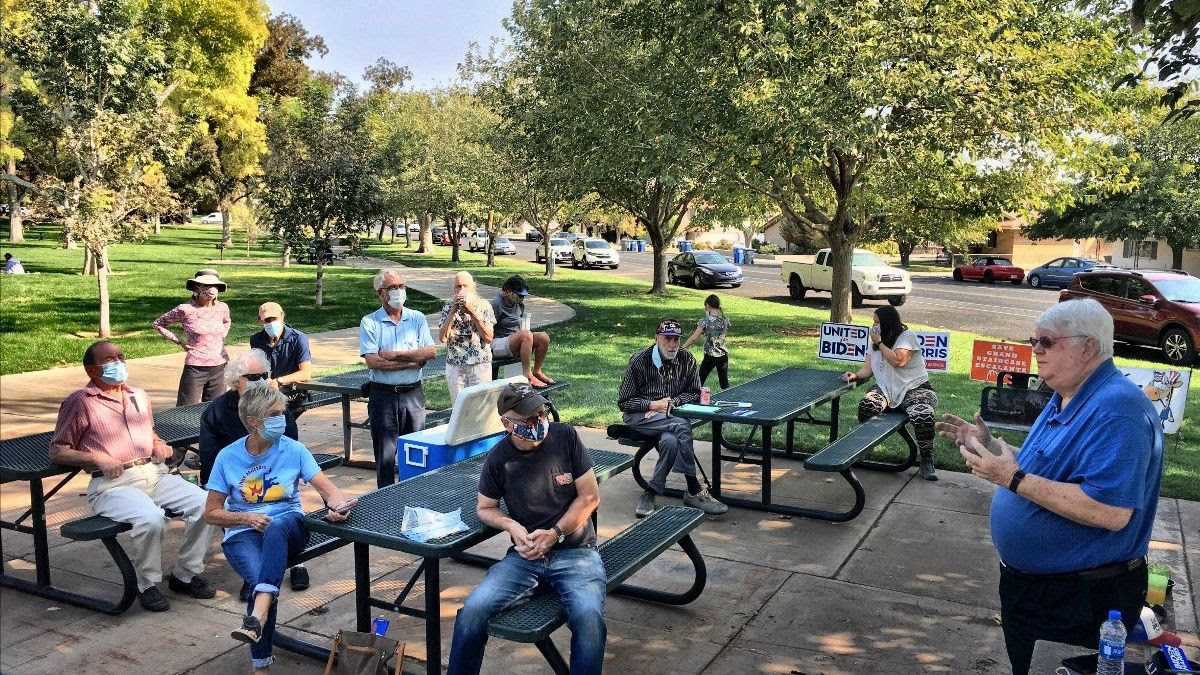 After almost ten months as a candidate, I sense turnout will be high this year—initial data appears to support this possible outcome. When I dropped off my own ballot (at the Salt Lake County Council building), there were a number of vehicles lined up. “Vote early” is our mantra. And then track your ballot online. Please encourage your family and neighbors and friends to do the same.

Our most recent travel centered around a pre-planned in-person forum in St. George. Chris Stewart, however, pulled out of doing it live, so the Dixie State candidate forum went digital. Before arriving in Washington County with a lot of signs (the Blue & Red design is most popular in rural Utah … the “Fire Stewart / Hire Weston” sign among true-blue Dems in SLC), we did a long radio interview on the Sean Hannity’ show station in Richfield; we stopped in Boulder and Escalante for food, news, and a bit of fundraising; and we visited with supporters in Kanab and students in Ephraim at Snow College. 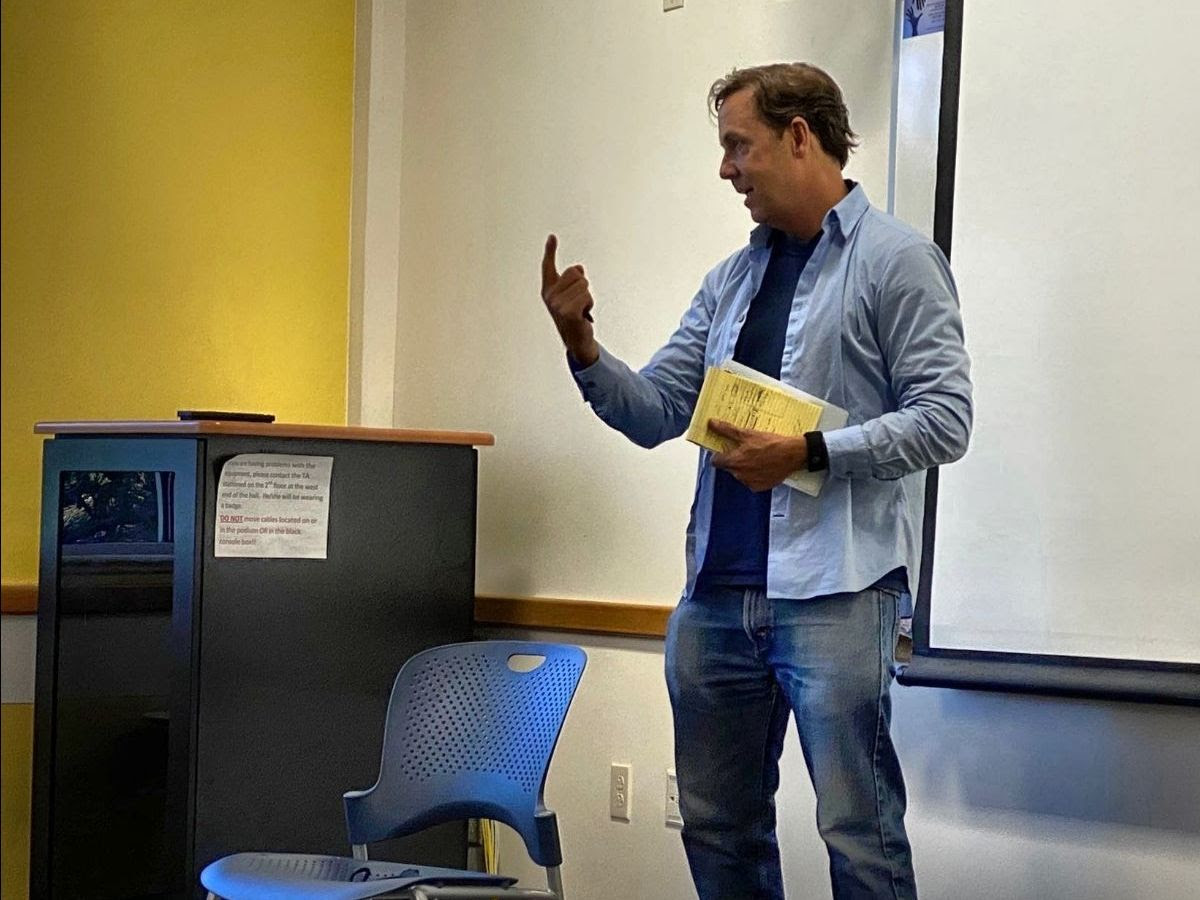 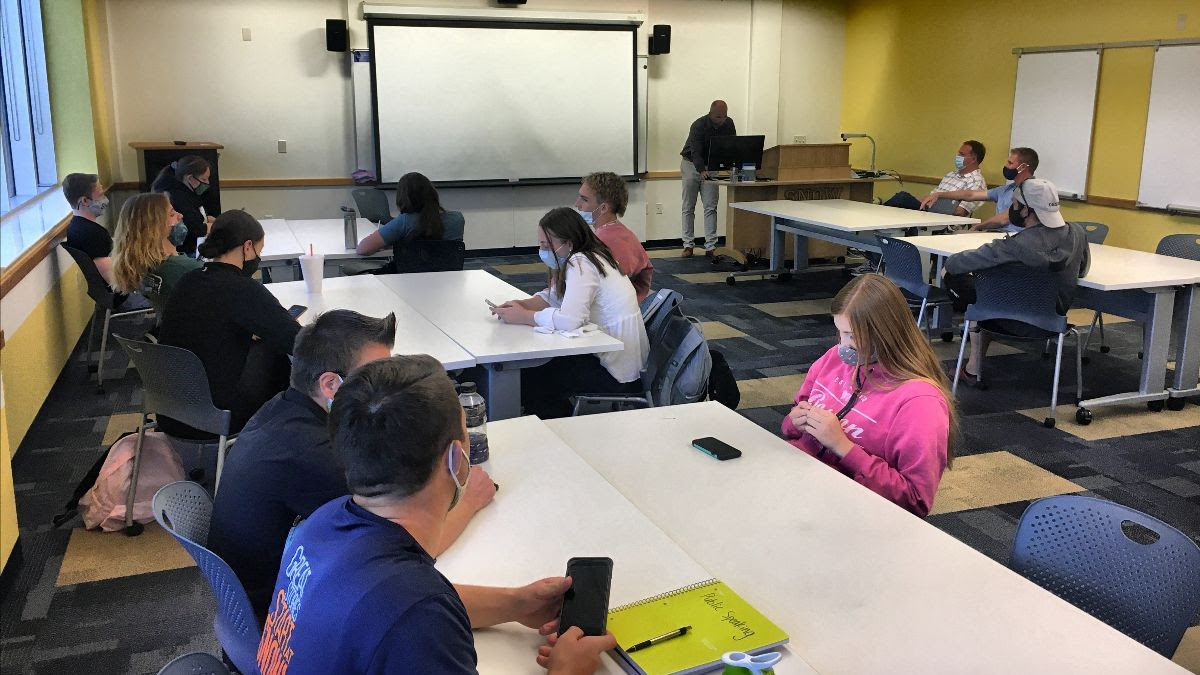 At Hell’s Backbone Grill, we met the famous chefs and a small group of residents—by the way, I had the Jenchilada, while tech director Tai ordered some homegrown beef. The dark skies above Boulder were a reminder of how lucky we are to have places in our state where the true majesty of the Milky Way can be viewed. Drone footage from just outside town should also help remind all Utahns of the importance of protecting these special lands.

Election-related apprehension is apparent in rural Utah (not just in urban ZIP Codes), particularly in Garfield County, where Stewart has proposed a national park. I consider this plan to be a bad idea and unwise public land policy that would undercut land protections. As I told the Deseret News, it smells like a stunt just before Election Day, and I believe President Biden will move to put the original monument boundaries back on the map.

For the last presidential debate, we met supporters in Kanab and were hosted by the head of the party’s rural caucus. Scrub jays, rabbits, and ravens also made for good company in a setting right out of a John Ford movie.

Final trek this week includes a Cedar City Chamber of Commerce meeting. I plan to ask their views about how public health matters can be addressed without continuing to have “no-masks required” viewed as a political statement … COVID data shows how much that approach is not working. 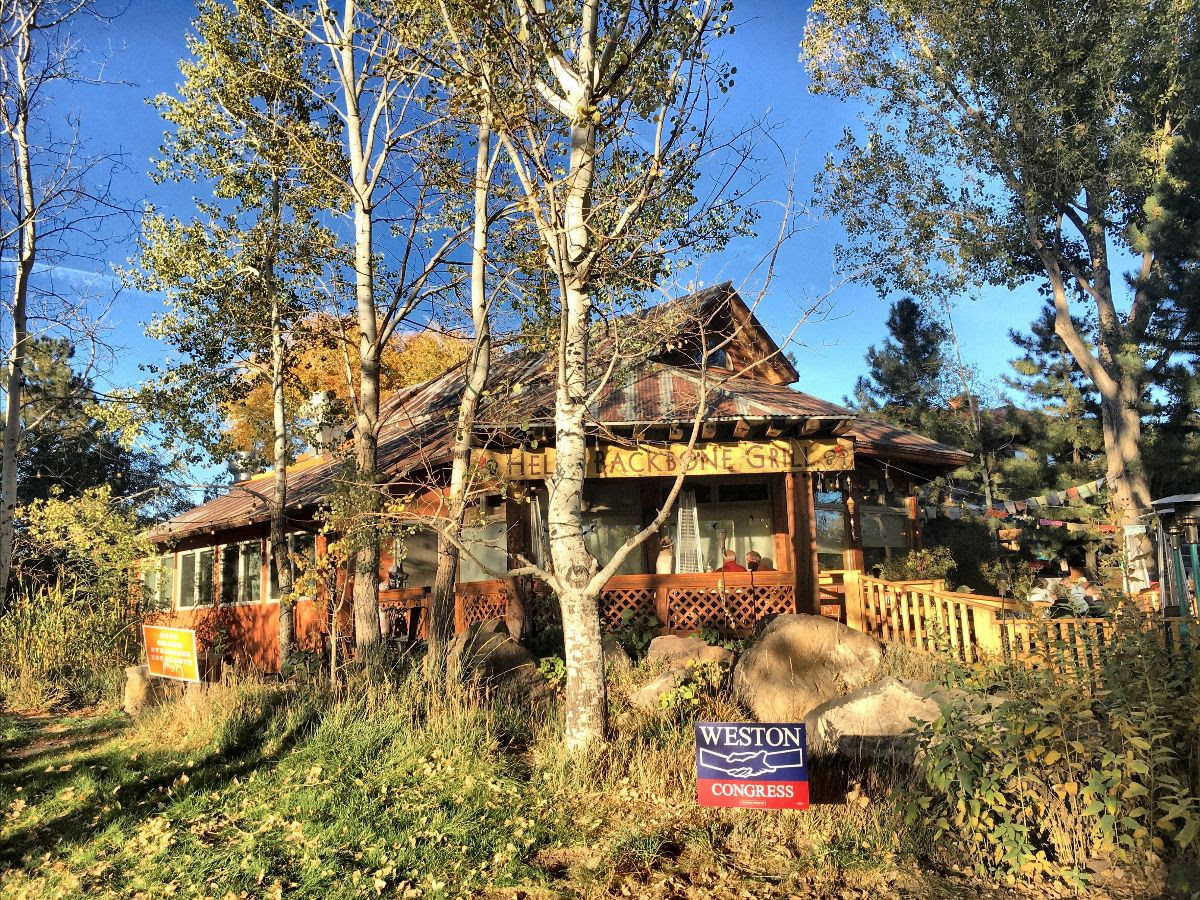 The Great Debate (and Richfield radio …)

We finally had that debate. The only debate. Rather than provide a rundown here, look out for a message from me this week.

My main takeaway is that by avoiding voters (and me) throughout this campaign, Mr. Stewart is out of shape politically. In a big way. He seemed nervous the whole night. I am glad we could focus voters on COVID and the ACA, as well as the Postal Service and land/climate issues. The Supreme Court “packing” question led to a follow-up, in which I said that I would rather focus on issues that bring us together. I also said that I trust the people and that this election should drive which justice to be appointed most accurately reflects the will of “we the people.”

If you have not yet watched the debate, I encourage you to do so. Our debate prep team, which includes many of you, really helped me get ready. Under the amazing orchestration of our Policy Director Shane Graham, we had volunteer Craig play Stewart and Tech Director Tai act as Libertarian Rob Latham. Each really nailed their personas—and answers.

Within eight hours after the debate, we were on the road to appear on a radio program … KSVC in Richfield. This is the first station we had put ads on, including protecting rural post offices and downwinders, so it was nice to meet the staff there. The interview covered forest fire prevention, COVID, and issues important to rural voters. It is worth a listen, if you get the chance. 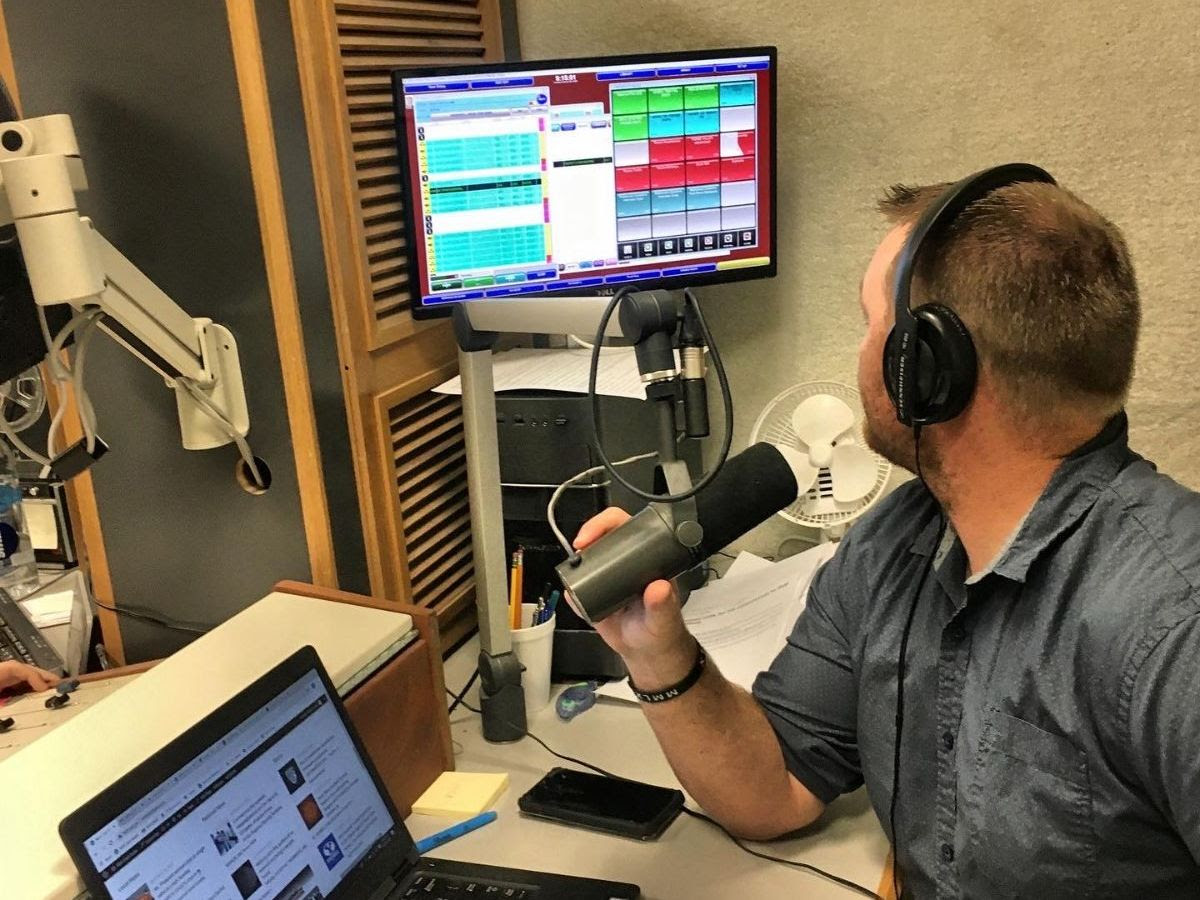 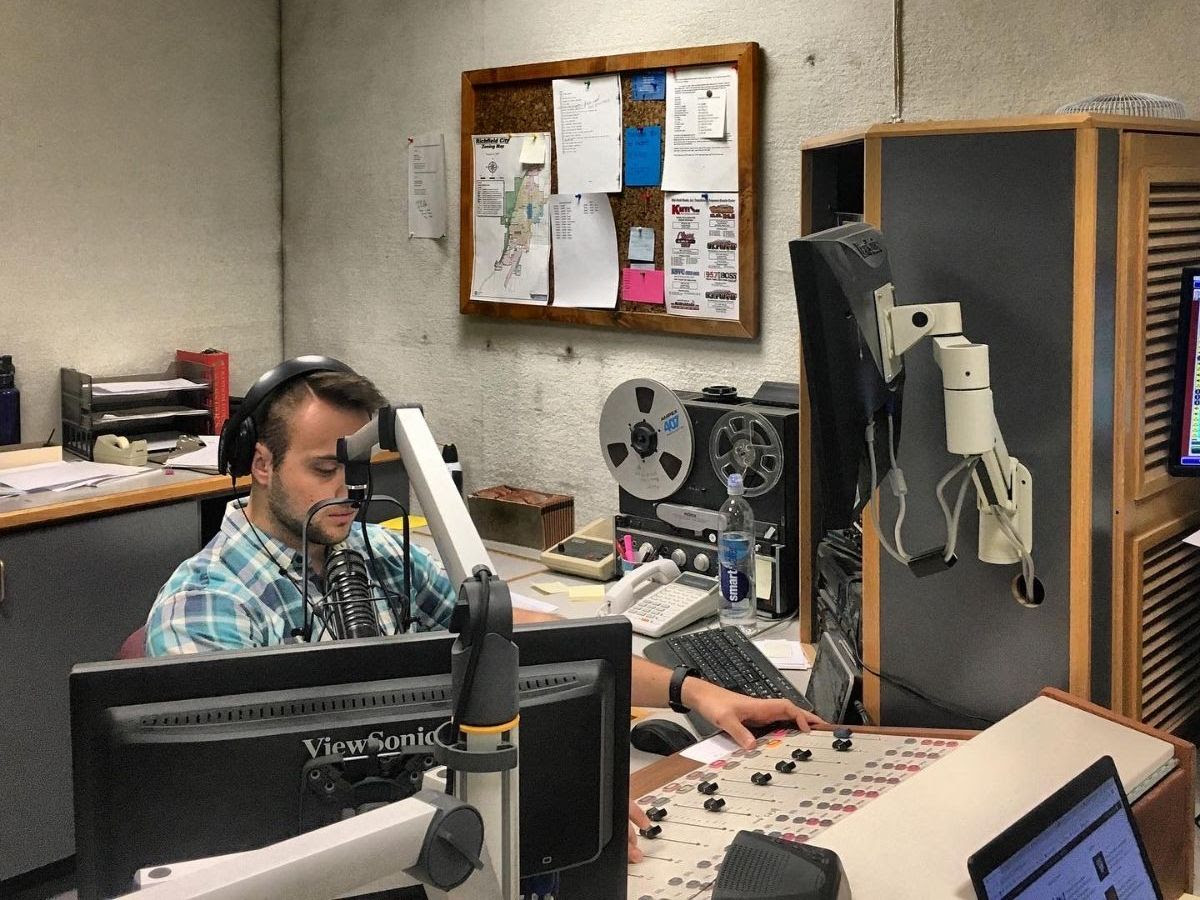 Finally: as I have written before, thank you—very much—for all you have done and continue to do for our campaign and joint effort. Campaigns are too important to be left to candidates, as I like to say. And campaigns certainly cannot move voters without all the hard work you do, daily and into nights, to move more support our way.

Together, by Election Eve (Nov 2nd), our consciences will be clear. We have given Utah voters what they need to make a decision that can help move our state and country forward, starting in January, when the rebuilding can begin. This joint Tribune OpEd with my good friend and 93-year old fellow Rotarian, John Zaccheo, speaks to the stakes. It appeared in Sunday’s edition.

Again, thank you. This campaign has been lucky to have such a great and diverse team, a digital bench that is both deep and motivating. I hope to meet all of you, eventually, despite the difficulties COVID. Before then, please know how much your efforts show in my conversations with voters. Many tell me how they have heard from our campaign and that our first impression is a good one.