A Nobel Prize winner in Economics

When I first became an author, I decided to make my email address public on my book-focused website. Several other writers and people at my publisher (Alfred A. Knopf / Penguin Random House) said this was risky. They warned that my inbox would get flooded with people wanting me to read their draft memoirs and short stories. Or seek to be introduced to my incredible editor, who has a real editorial checkbook for writers waiting to be discovered in a very tough business. Some of that happened. And that was okay.

I knew then that I, a very fortunate first-time author with a great publisher, did not want to surround myself with digital walls. That is the same approach and promise I have made throughout this campaign: to stay accessible, respond to voters, to listen. Recently, for example, I received a voicemail from someone I had never met who somehow found my cell number online. I returned his call, and we talked about the failure of the U.S. healthcare system. Policy is, after all, about people. Real lives. I received another email from a college student about how to better manage forest fires. That call is set up for later this week.

If elected, I will be an approachable, open-door representative, unlike the incumbent.

I am honored that one person who emailed me after reading my book is now endorsing my candidacy. He was humble then and remains so today. Only after trading several emails in 2016 did I realize this reader was a … Nobel Laureate in Economics at the University of Chicago.

Prof. Myerson, a University of Chicago economist and an expert on game theory, was named Monday one of three winners of the 2007 Nobel Memorial Prize in Economic Sciences.

He was recognized for his contributions to mechanism design theory… The theory allows for people to distinguish situations in which markets work well from those in which they do not. It has helped economists identify efficient trading mechanisms, regulation schemes and voting procedures. Today, mechanism design theory plays a central role in many areas of economics and parts of political science.

‘The theory of mechanism design seeks to understand how resources can be allocated in socially effective ways, even when the information needed to perform the task is spread among many individuals,’ said Phil Reny, Chair of Economics.

We subsequently wrote a joint piece on state-building and national security priorities in a Sunday edition of the Wall Street Journal and have since stayed in touch. 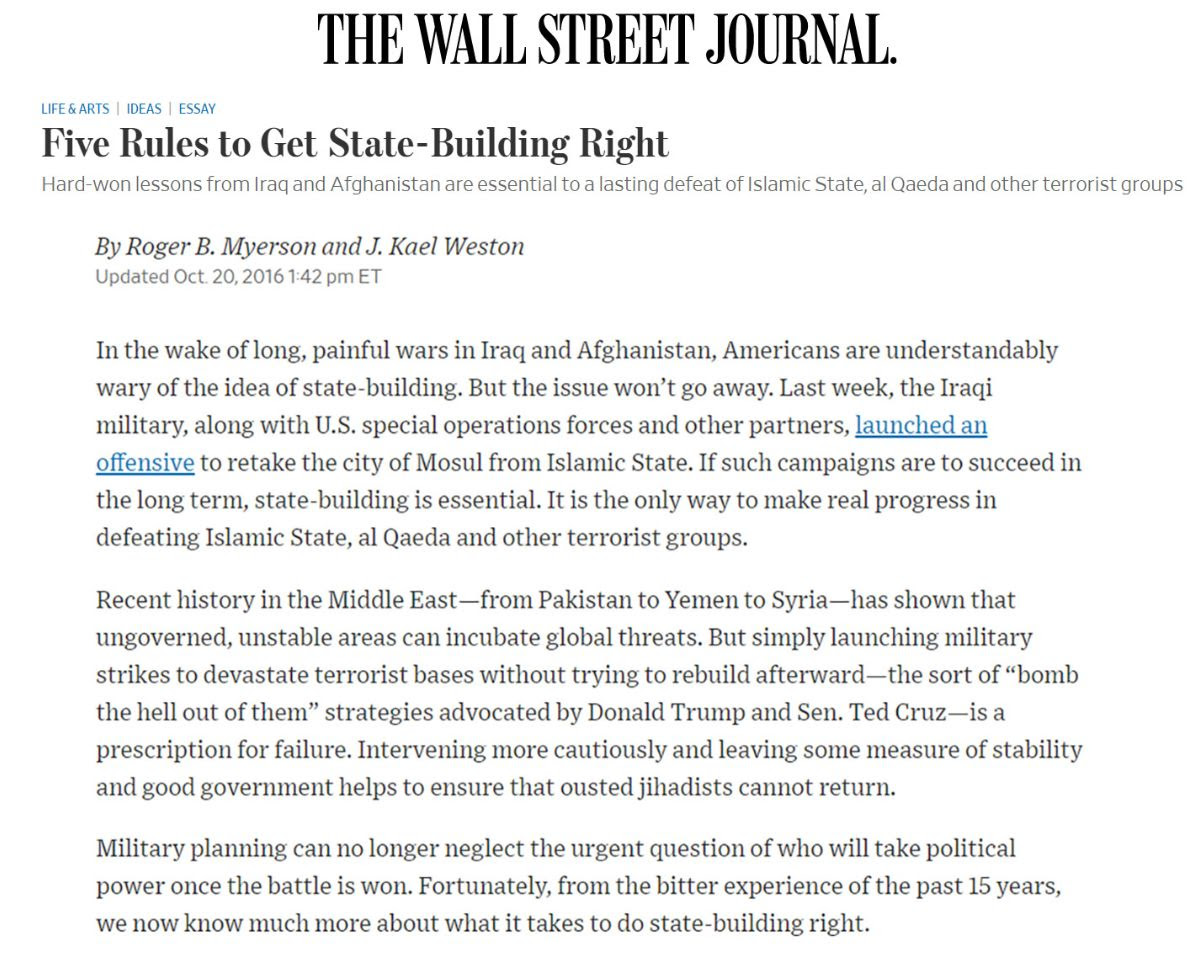 Roger has kept writing on important topics (see his recent piece in The Hill, linked below). I am looking forward to more joint projects as our nation moves toward policies that better safeguard our national security and public health in a time of global pandemic. (Incidentally, both Roger and I are also fans of good sci-fi writing.)

I hope you will take time to listen to Dr. Myerson’s endorsement and his Nobel acceptance speech.

This campaign has always been about the big changes we need in our state and country, starting November 3rd. Professor Roger Myerson is a true national and global asset. I am honored to have his support.

Thank each of you, as well. Every dollar and every hour of volunteer work and spreading word about our campaign moves us closer to our shared goal: overdue and urgent democratic accountability this election—and the beginning of a better future in these anxious times.

Toxic Trumpism needs to depart our White House. And collaborating Trumpists, like Chris Stewart, need to be voted out of office. Then, I believe, we will see a new and more positive political dawn, one we will not take for granted.

Until then our task this election year remains. Abraham Lincoln perhaps put it best: