A right and a duty

Fifty-five years ago today President Lyndon B. Johnson “signed into law the most sweeping voter rights protections the nation had ever seen.”

The Voting Rights Act, which was amended five times over the next ten years, increased government oversight in areas of the country with histories of voter discrimination, made it illegal to require literacy or (later) language tests, and effectively opened voting to hundreds of thousands of qualified voters who had been kept from the ballot box because of their skin color.

The results were significant: voter registration went up, voting increased, and consequently, more Americans participated in the election process—their right.

“In recent years, though, legal attacks have eroded the federal government’s ability to enforce the law. State legislatures—mainly those controlled by Republicans in states with increased minority turnout, according to a University of Massachusetts Boston analysis—have challenged the Voting Rights Act by passing a wave of new restrictions, including voter ID laws and reduced early voting.”

About the Voting Rights Act

In 2013, the Supreme Court ruled that the formula used to determine which voting districts required federal oversight as a result of past discrimination was outdated and struck down a critical section of the Voting Rights Act. As a result, over half the states in the country introduced “newly restrictive” laws with the potential to discriminate. “In 2018, the bipartisan U.S. Commission on Civil Rights…recommended Congress restore voter discrimination protections.”

A year later Congressman John Lewis, the legendary civil rights leader, secured the passage of H.R. 4. This House Resolution would fulfill the Supreme Court’s requirement that a new formula be determined by Congress and restore government oversight using that formula.

Chris Stewart voted against the resolution.

Though passed by the House, the bill was not—and still has not been—taken up by the Republican-led Senate. Rep. Lewis’s recent death brought renewed calls for action (including former President Obama’s impassioned plea during the eulogy he wrote for Lewis). However, the Senate has yet to act.

For more information on the Voting Rights Act and the fight to restore key provisions to ensure fair and open elections, visit the nonpartisan Brennan Center for Justice. 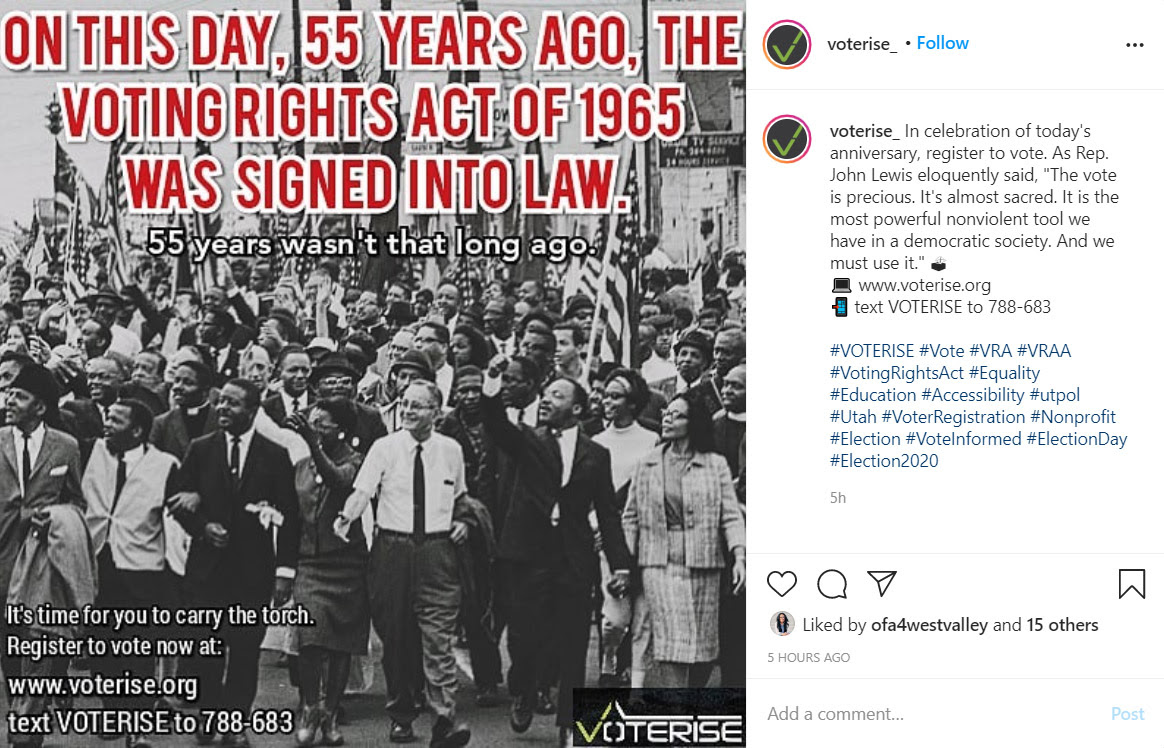 A personal note: as our campaign team and I have traveled CD2, voters say they are confident in Utah’s vote-by-mail system. During this pandemic, the safety of voters is critically important.

Barriers to voters nationwide need to end, tactics that have a clear racial and socio-economic dimension. Passage of H.R. 4 will help ensure this outcome and is a measure I support.

Concerns about voter fraud have not been proven by data and instead appear to be a White House effort to call into question a fundamental right—and, perhaps, the peaceful transfer of power this election.

For information about voting in Utah visit vote.utah.gov.

Are you registered to vote? Check the national database.
https://www.usa.gov/confirm-voter-registration

If you are not registered to vote, go to the state voting site.
https://secure.utah.gov/voterreg/login.html?selection=REGISTER

Learn about voting by mail.
https://voteinfo.utah.gov/learn-about-voting-by-mail-and-absentee-voting/

Interested in helping with voter registration?
Start with these three organizations:

Our democracy depends on our participation. Voting is a right, it’s a duty, and it’s the foundation of our country. This November we vote in what is likely the most critical election of our lifetimes. Check your voter registration. Help your friends, family, and neighbors do the same. And then vote.

Vote like our country depends on it, because it does.