Issues that bridge the red-blue divide

Now that our campaign has covered over 3,000 miles across all 14 counties of CD2—a geographic area larger than some east coast states—the true potential, not just challenge, of this gerrymandered district is apparent: within its boundaries, residents have highlighted two important issues that could act as bridges between red and blue America, regardless of income level or zip code:

Downwinders and the effects of COVID.

If our nation is to beat back division, I believe it will have to start in a district like the one I’m running in, where ranchers live alongside Southern Utah wilderness advocates and where Salt Lake City’s urban dwellers cast their vote on November 3rd on a ballot that includes folk who commute along dirt roads in Utah’s most remote locations. Retirees. Unemployed college graduates. Alfalfa farmers and 5th-generation ranchers. The “Silicon Slopes” tech community. Warren and Buttigieg and Yang and Bernie and Biden supporters. And, yes, ex-Trump supporters—or some sliding percentage thereof.

Some local history: U.S. nuclear tests in the 1950s irradiated many communities in Utah, in other directions, and well beyond Utah’s borders. Current federal legislation is under consideration to help expand health benefits to families affected by the radiation clouds shown in these maps.

Left: “Areas of the United States crossed by two or more clouds from atmospheric nuclear tests in Nevada between 1951 and 1962. Map created by researcher Richard Miller based on AEC records on radiation dispersal from weapons testing.” Is your state on this map? Right: National Cancer Institute state and county exposure levels.

Congressman Ben McAdams, Utah’s sole Democrat in Congress, is an advocate, as has been Utah activist Mary Dickson. McAdams and groups of downwinders have called for expansion of the 1990 Radiation Exposure Compensation Act (RECA), which compensated some cancer victims in nine southern Utah counties. My own dad’s cancer diagnosis qualifies under RECA and he has applied to the program. The proposed new legislation would include all of Utah and many other states, a crucial expansion of the downwinders map. They also called on lawmakers to block a proposal by President Trump to restart nuclear testing in Nevada (Salt Lake Tribune 7/6/2020). As the Democratic candidate in CD2, home to numerous downwinder families like my own, I support these steps and will be speaking on the topics in more detail through Election Day. Incumbent Chris Stewart is, yet again, silent. 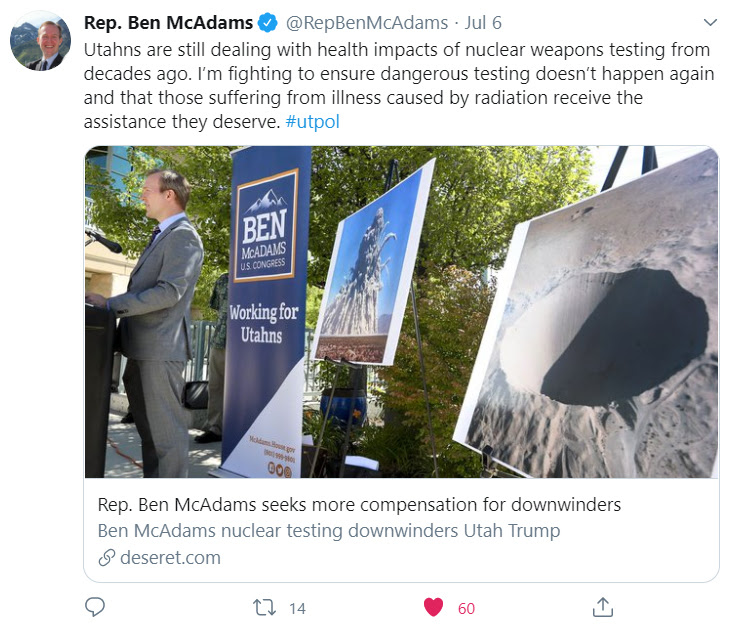 In my recent meeting with Republican Beaver County Commissioners (after being asked a lot about land issues), I pressed them on how the long-lasting effects of nuclear testing in the American West should bring us together in common cause. They nodded. In a separate conversation with a small-town mayor in Garfield County, she said her father, who lived in Kanab, had passed away from cancer. I noted that my own dad, who grew up in Milford, was currently dealing with it. The unfortunate ties that bind.

Footage of atomic tests in the Nevada desert (1955).

And today? The Trump administration has begun to talk about more nuclear testing. 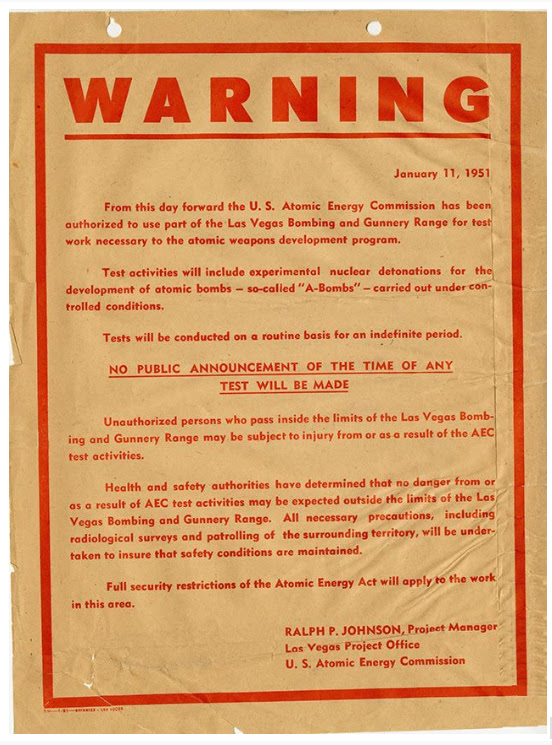 While on the CD2 Trail, it has also become clear that COVID-19 remains the top issue in voters’ minds. Utah’s positive rates are high, with a mandate for masks statewide currently under consideration. Hearing about the economic effects of the virus are one level of my conversations with voters, but there is a deeper one. People have said the failure of our government to have a plan and medical supplies is turning into a baseline referendum: the incompetence of elected leaders.

The unnecessary Iraq War taught me that when government is incompetent and does not care about the result of failed policy, people can die. COVID is a similar red reminder.

I am running on competence.

I am running on being a serious candidate for serious times.

My argument has been straightforward: hiring me and Democrats is not about a litmus test on any individual issue but rather a clear choice about governing values—putting the common good first—and making sure incompetence, and government lies, will no longer get people killed. Nuclear tests did that. The Iraq War, too. As COVID is now. 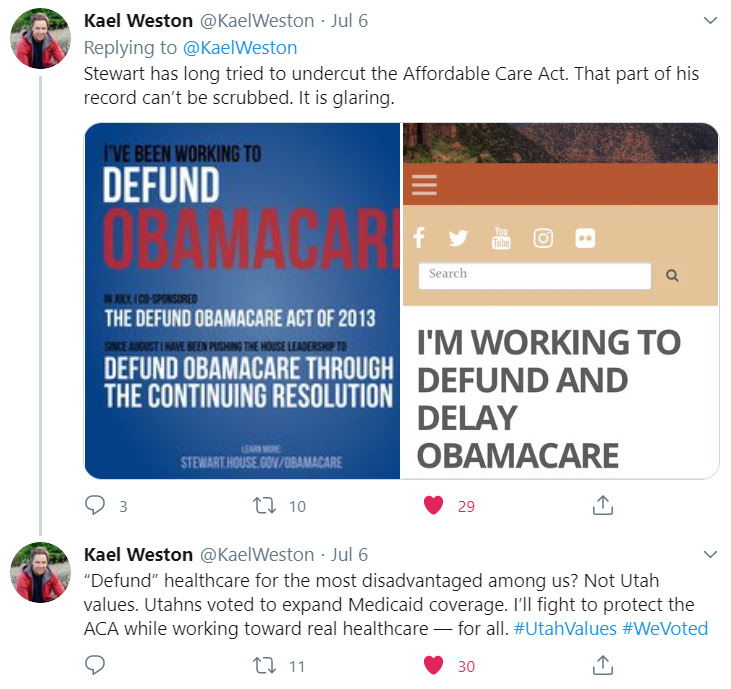 Please keep in touch. I take your messages seriously, read them all, and have started many good conversations with you full of insights and welcome advice that make our campaign better.

Your support is essential and appreciated. Thank you.