What we can do to help reduce Ukrainian suffering 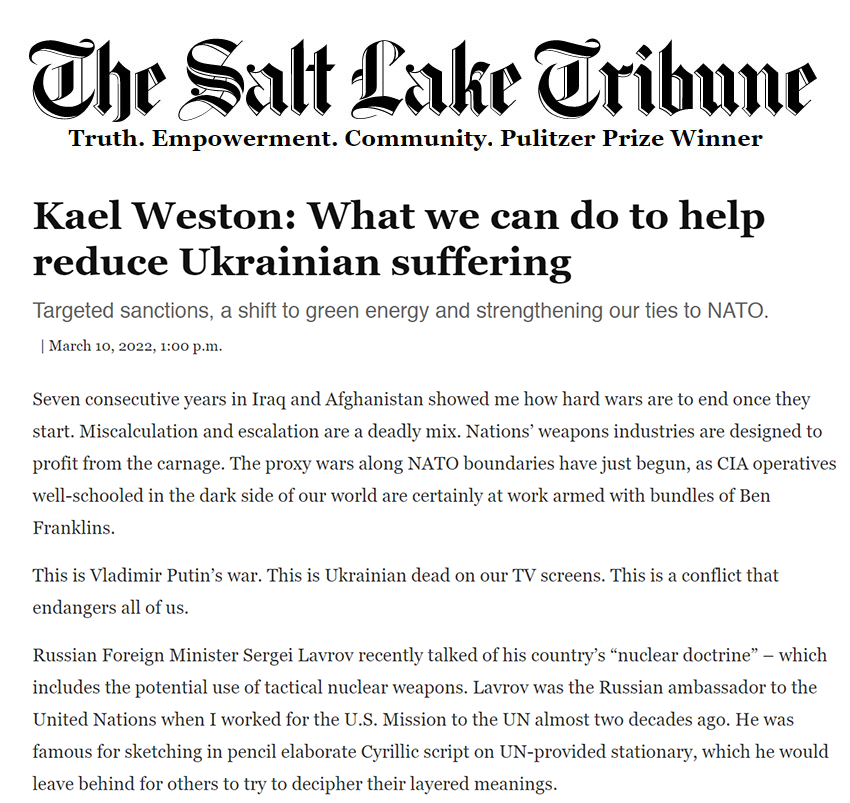 10 Mar What we can do to help reduce Ukrainian suffering

Posted at 13:00h in Accountability, Home Page, War and Peace by admin

As we have watched the war in Ukraine unfold, U.S. citizens want to help Ukrainians. Kael Weston helped develop U.S. sanctions policy. He represented the U.S. on the UN Security Council’s Al Qaeda and Taliban Sanctions Committee, where he worked to build unanimous agreement among 15 Security Council members. He published an OpEd in the Salt Lake Tribune describing that work and how he can apply this experience to help the people of Ukraine.

“In that role, I argued that targeted sanctions should be used to “name and shame” other dangerous individuals. Henchmen around the world who like to live and shop in London and Dubai and send their children to exclusive schools – but who also put international peace and security at risk while making mountains of money. It is good to see Russian oligarchs’ yachts are now impounded and many of their assets seized.”

He suggests that we can help through targeted sanctions, a shift to green energy, and strengthening our ties to NATO.

“Past efforts by short-sighted politicians to undermine NATO must also be recognized for the dangerous game they played while on our payroll. Sen. Mike Lee, for example, never once visited our troops or diplomats in Iraq and Afghanistan but he did travel to Moscow. Humanitarian aid budgets should be passed quickly in Congress and be bipartisan. This includes fast-tracking refugee resettlement funds as Ukrainian numbers surpass two million.”