With just over three months to Election Day, I wanted to take a moment and share a message … from my Republican opponent, Chris Stewart, which he recently sent to his supporters.

Stewart in his own words

I believe it is important that we remember what we are trying to change, together and in a big way, this election. The content of the message is extreme. Stewart’s priorities are out of sync with the urgent needs of Utahns and Americans suffering the effects of the public health catastrophe and economic crisis brought on by COVID-19 and the Trump administration’s deadly incompetent response. His diatribe is an indictment of everything wrong with today’s politics. Here is Stewart in his own words:

“We are all afraid of losing personal liberties to a radical socialist agenda.

What has always seemed impossible in America is now the platform of Joe Biden and so much of the democratic party as they continue to drive our country away from the core principles that have made America the greatest country in the world.

So much of the madness around the country right now is the product of a socialist agenda.

This is why Congressman Stewart founded the Anti-Socialism Caucus in Congress, to teach people about the perils of socialism and the virtues of capitalism.

The free market has lifted more people out of poverty and created more prosperity than any other economic system in history.

In the war against socialism, there is clearly only one leader in Congress, Chris Stewart. That’s how Congressman Stewart represents Utah values in Washington.” 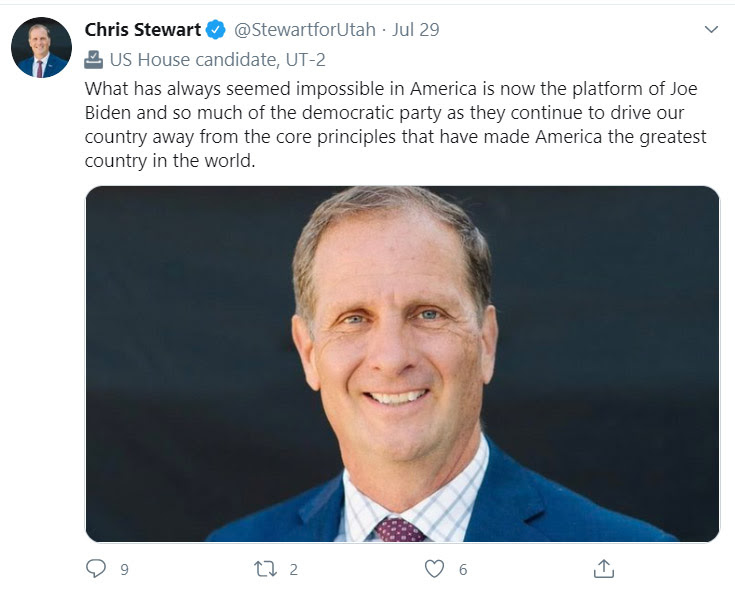 You will see that Stewart’s main message is basically … that we should hide under our beds because of a new Socialist Invasion. When I read this divisive and dangerously disconnected message, I am reminded of the stakes this election. Stewart is all in with his “war against socialism” and all in with Donald Trump.

This is the right political fight for all of us who believe in a better future and in democratic accountability at the ballot box. 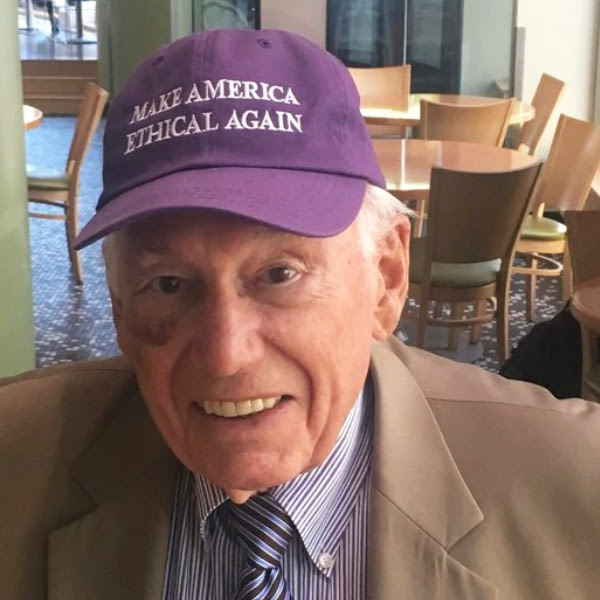 I offer some contrasting reading as well: my 93-year wise friend and fellow Rotarian, John Zaccheo (above), and I recently co-wrote an opinion piece published in last Sunday’s Salt Lake Tribune (July 26).

We wanted to bring attention to the great damage Donald Trump has done to our relations around the world and how important it is that we begin the major repair work on November 3rd by voting Trump out of office along with all the GOP collaborators, like Stewart, around him. Trump’s behavior stands in great contrast to other world leaders:

“In the eyes of much of the world, well beyond the European Union, Americans are considered an outright risk to global public health. Mask-less equals selfish and careless. In contrast, Germany and New Zealand have strong leaders, women, who faced pandemic facts up front and then mobilized their nations. Chancellor Angela Merkel and Prime Minister Jacinda Ardern did not politicize face coverings. They rallied their people in solidarity. They made crucial policy decisions based on science, with input from trusted medical experts. They led.”

The U.S. COVID response, Russian bounties, and withdrawing troops from Germany to weaken NATO are all examples of this damage.

Despite the seriousness of our situation, there is hope and inspiration to recall and achieve again as a more united country.

“Our country recently marked an important anniversary—the Apollo 11 mission in July 1969, which put humans on the moon for the first time. While the flag placed on the lunar surface was our Stars & Stripes, U.S. astronauts were given an important follow-on mission once back on Earth. Our government sent them on a 38-day goodwill tour to 28 cities in 24 countries across six continents (Mexico City to Rio to Oslo to Kinshasa to Tehran to Bombay to Bangkok and beyond). The message was simple: space exploration has the power to unite us, regardless of what other issues might divide us.

That is something all of us should miss deeply. An America, while far from perfect, that led by example. A country of bridges. Not walls. A country of dreams. Not nightmares. When we welcomed the differences in others, rather than be told from the Oval Office that we should live in fear.”

These two very different messages are a case study of why your support is so essential. You make this campaign possible and help get our message out to voters.

It is well past time that we return to focusing on the common good and policies and programs that are designed “for all”—not just for some:

Next week, I will be meeting via Zoom with representatives of the LDS Church and reaching out to Goshute tribal leaders in Ibapah and Skull Valley, military leaders at Dugway Proving Ground, and supporters in Tooele, Salt Lake, and Davis Counties, among others. We’re stronger when we come together around common values, with a sense of purpose and a willingness to work.

Thank you for being with Team Weston—Lori, Judy, Julie, Tai, Gwen, Lance, Safia, Will, Lynn, John T, Kim, and John Z and over a hundred talented volunteers—as we continue to work hard on the priorities that matter to Utahns.

Please stay in touch. Thank you for your time and support.