Happy Halloween. While this congressional campaign is nearing an end, our team and volunteers continue to work hard to get out the vote. We have been contacting conservative voters this past week, with some positive traction, while still reaching unaffiliated and Democratic-leaning supporters. In Utah, voter early turnout is high, reflecting patterns in other parts of the country.

I also have been hearing directly from individual voters. A sample: one mother wrote to me about her two adopted sons. Both have worked at local ski resorts and in restaurants—their health care coverage situation remains tenuous. Another voter in Southern Utah wanted to hear my views on assault weapons. I have been shot at in Iraq and Afghanistan, while with the State Department (words were my weapons), so that is usually the unique context I convey when responding to 2nd Amendment questions. A third supporter reached out to emphasize the importance of future national legislation that would further protect Utah’s public lands, which are seeing record-level visitation in this year of pandemic. And here’s one message that is still on my to-do list:

Just got off the phone with Kelly XXXX, 60, lifelong resident of Hanksville. She won’t be voting in this election because she sees the whole system is a sinking ship. I bet you might be able to change her mind.

(Note: The engineers of the RMS Titanic predicted that if water levels breached Boiler Room Number 5, the unsinkable ship … would sink. North Atlantic frigid seawater did just that post-collision with the iceberg. I do not sense we are there yet, even though we seem to be The Disunited States of America in 2020—courtesy of Trumpism—but are closer than any one of us would like. I plan to convey as much to Kelly in Hanksville.)

Today, I also wanted to share with you my sense of the district just before Election Day. Below is a reminder of the map, including a new “X” which marks my latest stop last Thursday—in the small town of Hanksville (ZIP 84734, pop. 217), located on the easternmost edge of the district. It, too, has a Post Office worth protecting and keeping open for business. Our campaign has now covered almost 8,000 miles in total, wearing down a quarter-inch of tire tread, from Callao to Big Water, and many places in between. We haven’t been to every small town yet, but we’re not done trying either. Many more stops, many more post offices, many more vistas. Before reaching dusty Hanksville, I began my 750+ mile round trip to Cedar City at the invitation of the local chamber of commerce. En route, I passed through a number of small towns, several of which had Trump flags up—one ranch-style home had a battered Bernie flag on a pole, seemingly in defiance of neighbors’ much larger Trump flags. Between these houses were more small signs encouraging local residents to address rural Utah’s mental health challenges (“you are wanted” “don’t give up” and so on). Big rigs, Subarus and FourRunners with camping gear atop, and a few solo cyclists passed me in both directions under fall’s slanted yellow sun and cool temperatures. Most trees’ leaves had already fallen, reflecting the region’s ongoing drought. The land looked tired of 2020, ready for the year to end, as have many of the people throughout my CD2 Trail travels. 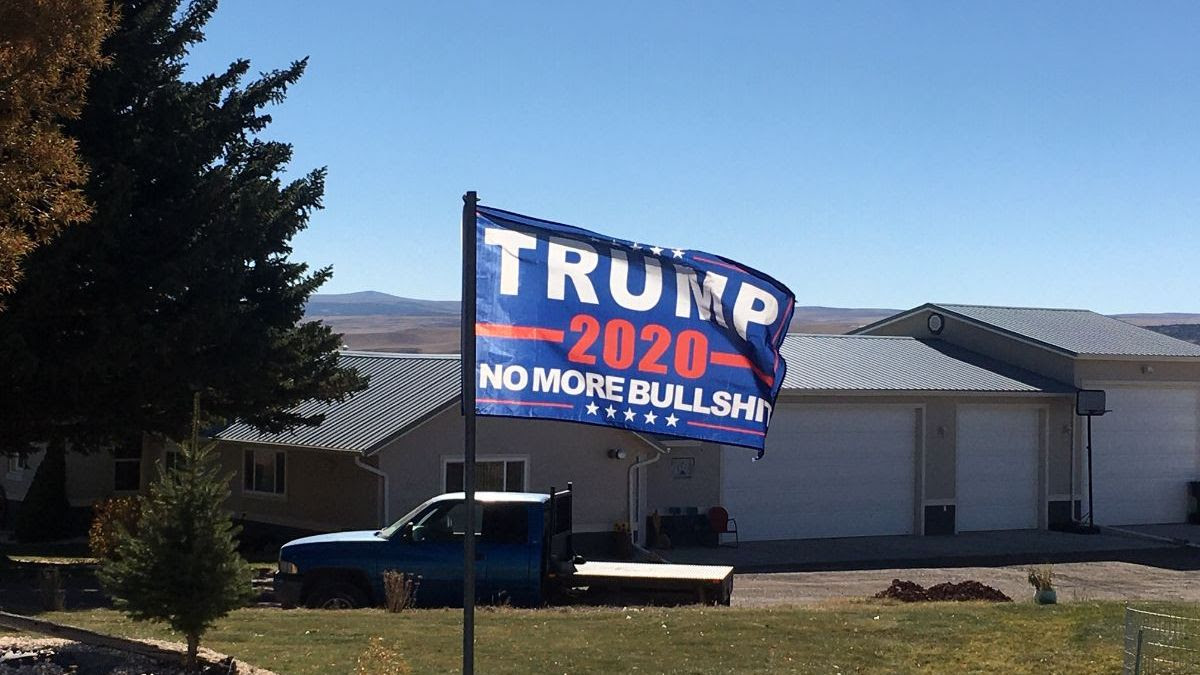 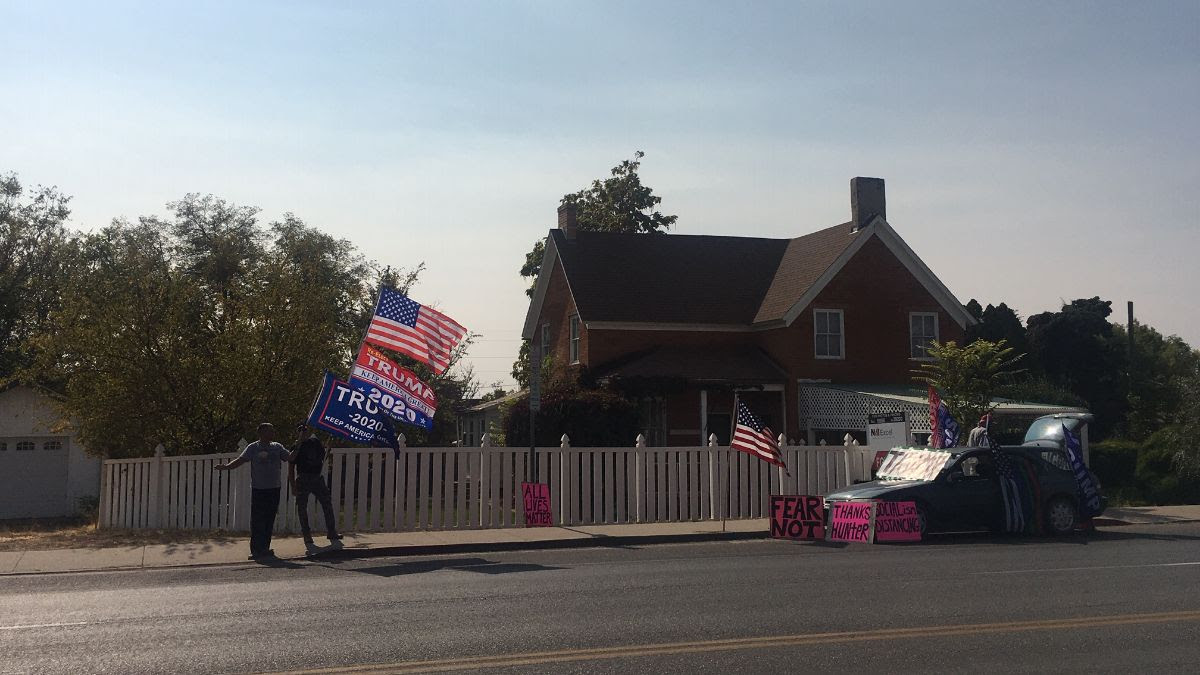 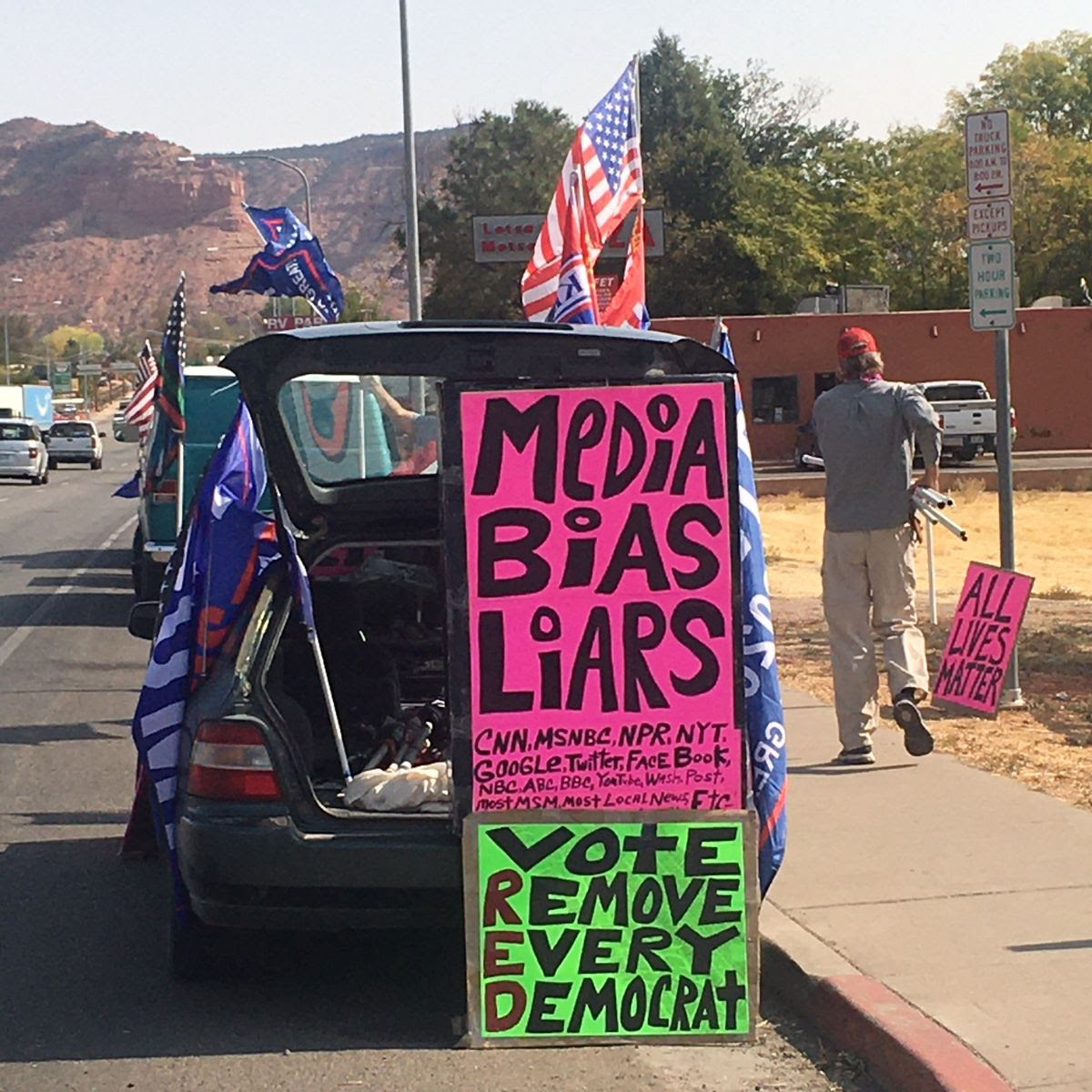 In Richfield (pop. 7,908), I stopped at a gas station. Few people inside wore masks, including a mother and daughter working behind the counter. I bought, for a buck, the local paper. In the pages of The Richfield Reaper, two opposing letters stood out. Each was making a case on Election Day.

One letter to the editor was titled, “Unfit” … laying out the case against another term for Donald Trump. The writer was blunt: “Trump is a narcissist” “You can’t explain anything to him, he refuses to listen…” “He enjoys seeing the suffering of others” and concluded with the question, “knowing all of this, why would anyone vote for Trump?” Another local resident made the opposite case: “The Harris/Biden ticket (in that order) will raise your taxes beyond belief to pay for the shortfalls of those Dem run blue states that can’t/won’t manage their own money” “They want to take your rights to own a ‘legal’ gun …” “They want (and are doing) to defund and dismantle law enforcement agencies who protect us from the unruly groups …”

And, so, in Utah’s 2nd Congressional District the debates go on in the final days before Nov. 3rd.

Political battle in newsprint is an American tradition, no matter the heat on the page. 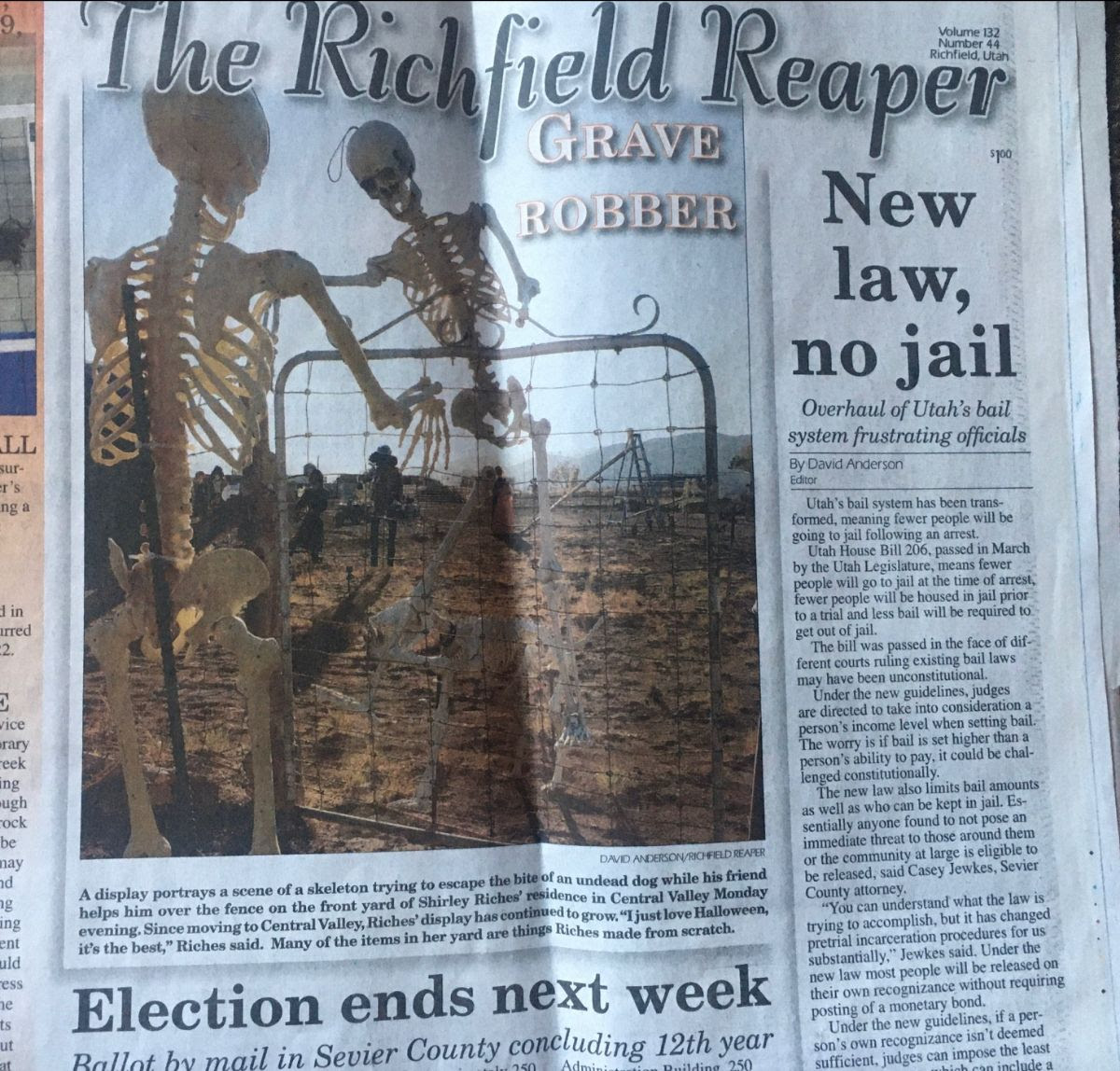 While in Cedar City for that chamber of commerce gathering, I woke up early to drive by a local middle school. I had been told there were regular demonstrations against masks. Sure enough, in the dark and despite the 27-degree temperature, parents and children held signs, which read: “Fear is the real virus” “Give me Liberty or Give me COVID” “COVID = HOAX” “Masks are for slaves.” 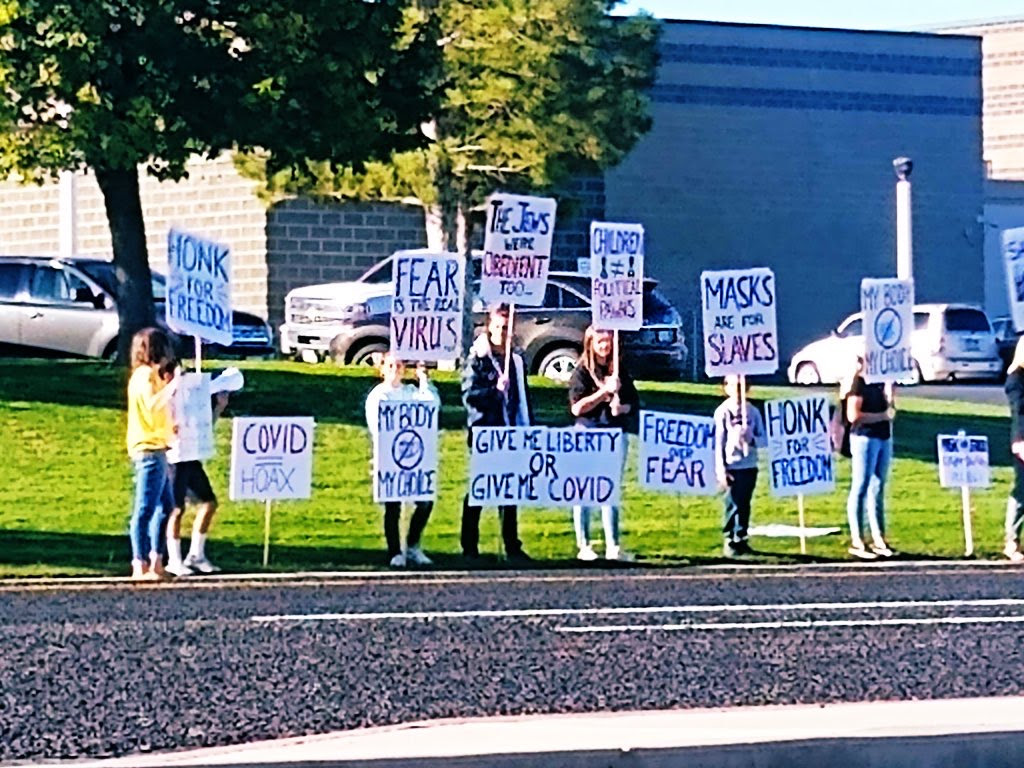 The following day, Utah recorded its highest level of COVID cases and—for the first time—sent out a statewide alert: 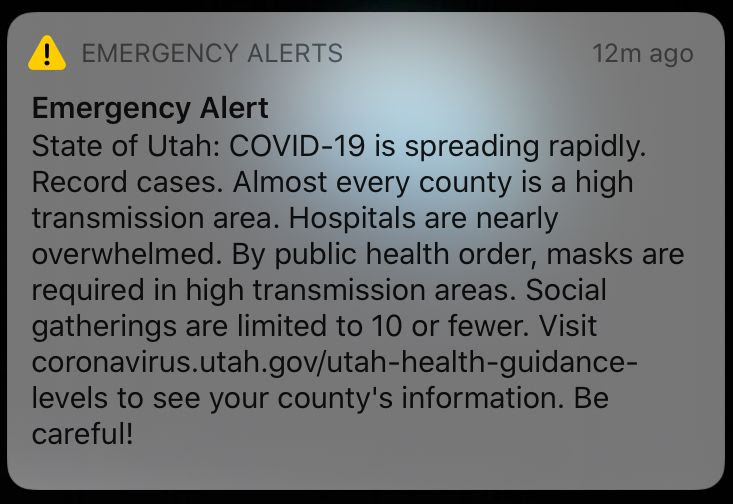 Along the scenic byways I know well, there was some deeper perspective in light of today’s politics on this final campaign trek in my old truck. I stopped in the historic town of Fruita (inside Capitol Reef National Park) at the local schoolhouse, still upright under towering sandstone cliffs. I could not help but wonder how much communities in those days—the structure was built in 1896—were dependent on the goodwill and cooperation of neighbors. Late 19th-century pioneers living in hard and arid lands must have created bonds that were well-tested and essential to survival. Our current public health crisis and pandemic represent a similar test: how much are we dependent on the actions of others—and to what degree are self-interest or community interests prioritized? 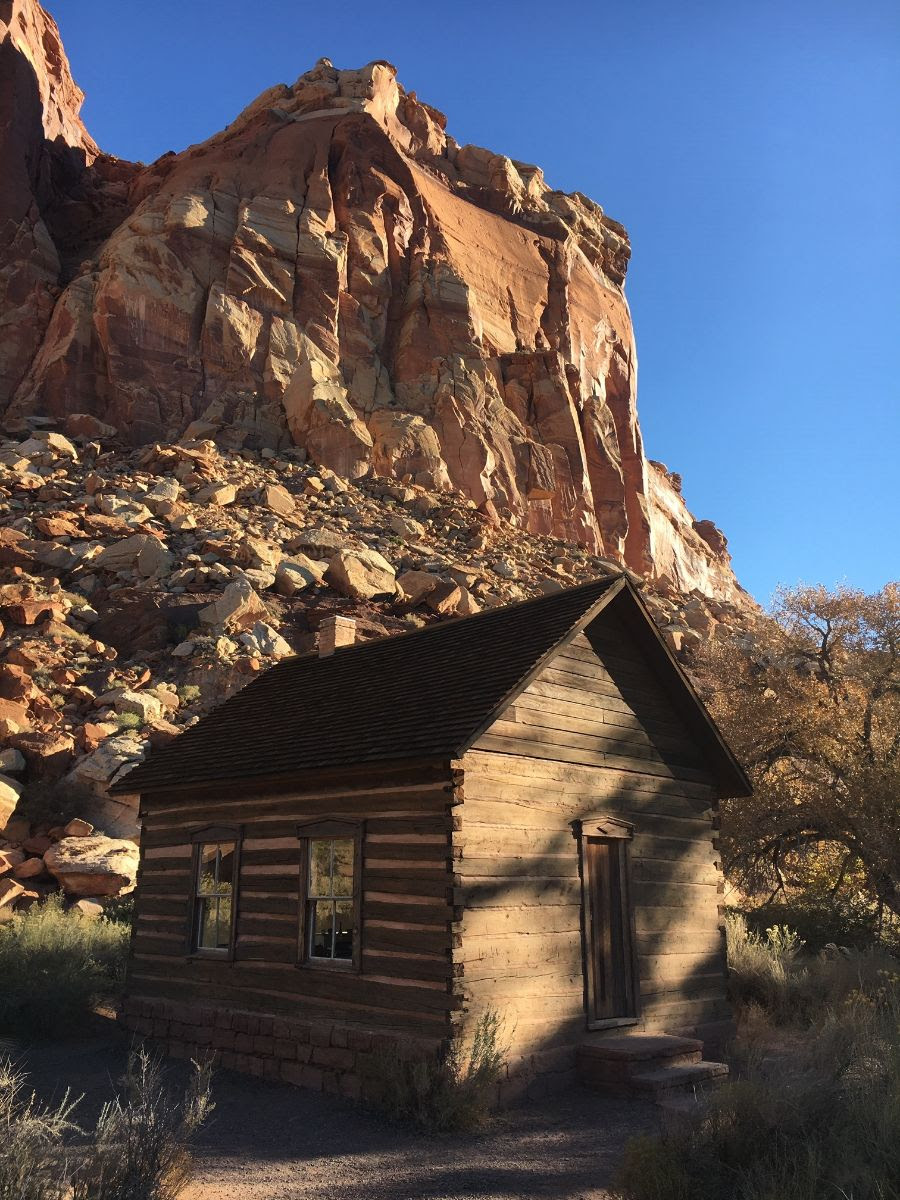 I remain hopeful that Lincoln’s “better angels” challenge, still relevant so many years later, will win out among a majority of us and our neighbors. November 3rd is the first big test of my sense of that, nationwide.

In a Mother Jones article published yesterday on Utah’s slow transition from red to slightly less red, the author believes that “If there is a purple future for Utah, it might look a lot like [Evan] McMullin, a former intelligence officer and former GOP Hill staffer.”

Thank you for all your support. In three days, the vote tally will begin to be made official. As a candidate who has long said “I trust the people”—and I do—I stand ready to call my opponents on Election Night or receive their calls and reinforce the same key message: let’s all help get our country back on track in 2021 and in a much more united way.

Our team and I will be back in touch soon to provide information about a joint Zoom session with former presidential candidate Evan McMullin. We hope you’ll join us. Mr. McMullin has been a key voice in working toward finding common ground—between parties and despite differences.