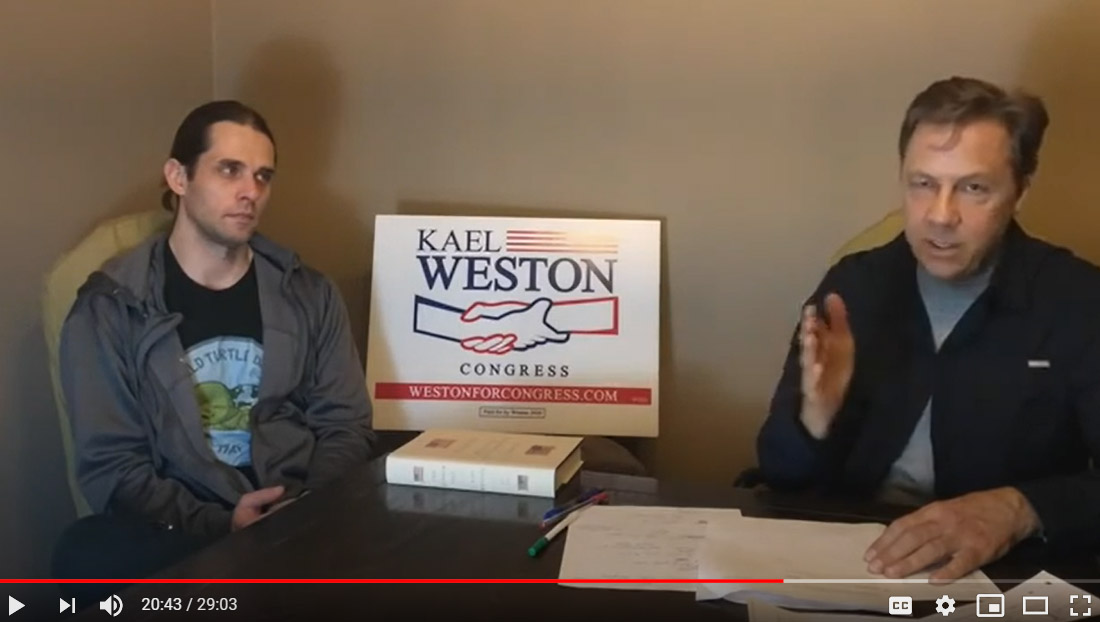 13 Apr What is the net effect of failed policy?

Every week or so, I am going to address issues with our campaign team members around the kitchen table. This week I sat down with Tai, our Technology Director and a former Marine rifleman originally from Logan, to talk about the pandemic. This video is a short version of our talk about policy (15 minutes). You are welcome to view the longer version (29 minutes) on our YouTube channel.

The net effect of bad policy: people are dying

What I learned in my role with the State Department is straightforward and important: bad policy and incompetence in government gets people killed. I have seen what happens when our government fails at the level of policy, preparation, and wisdom.

None of us want to be where we are. What this virus has shown is that this is a similar situation that I tried to get to in my book, The Mirror Test. If we don’t have people with a lot of experience and wisdom in government, people can die. I look at the images of body bags in New York City, and I wonder how did we get here.

How did we get here?

I know how we got here. We have the wrong people in government. We have people who treat government as a game, like Chris Stewart does.

I’ve never met Chris Stewart. I hope I have that opportunity. I promise to be respectful but direct and blunt. The reason I’m running is: I don’t think he’s doing a good job. He’s put self interest and party interest over the interests of our country. The net effect of that failed policy is that people are dying.

Chris Stewart has had a couple of Town Halls recently. I listened to the first one. I’m grateful that he did it. I think it’s important that he at least tried to reach out, but that doesn’t excuse what followed. The town hall I want to focus on was held last Thursday night, April 2nd. I was there with members of my team.

I had been told that Stewart’s team filters out the hard questions. I promise you that I would never do that, if I’m fortunate enough to be in Congress one day. I want to be asked the hard questions, because, if hard questions are asked, you get to the solutions to hard problems.

I came up with a question that was not a soft-ball question but an important one. I asked:

What about future legislation? This first package is intended to help people, but $1200 isn’t going to help a lot for a long time.

That question got me through until I was the first person they went to. I then added two more questions. The second question was the one I really wanted to ask:

Do you support a 9/11-style commission to look at what went wrong? How did we get to the point where our doctors and nurses don’t have PPE?

The third question I asked was:

Do you support the President using the Defense Production Act?

The question I want to focus on is based on a very good article that came out the day after this Town Hall. I want to thank Dennis Romboy, who wrote the KSL.com piece, “Representative Chris Stewart backs COVID-19 commission as long as goal isn’t to embarrass Donald Trump.”

“Rep. Chris Stewart would favor a 9/11-style commission to look at how prepared the United States was to handle a pandemic as long as it doesn’t set out to embarrass President Donald Trump.

“Stewart said he would not support a review trying to blame someone for the U.S. response to the coronavirus outbreak. Most government agencies, he said, have done an “extraordinary” though not perfect job.”

That’s ironic because Chris Stewart for a long time has attacked government, left and right, up and down.

What Utahns say back to Chris Stewart

I want to highlight a few comments that Utahns made on KSL.com because I think they speak very directly and eloquently about what Mr Stewart is trying to do. We all know Mr. Stewart’s background. He seems to take very lightly the professionals in our government. We remember during the last panel with Ambassador Yovanovitch and Lt. Col. Vindman and how he treated them.

These are comments on the KSL.com story:

“Mr Stewart should be more concerned about getting to the truth than trying to protect the President from embarrassment, should it be determined it is deserved.”

“Stewart seems to be concerned about a lot here. Protecting Trump’s reputation, not encouraging socialism, protecting state sovereignty of states that are not protecting their citizens, and not getting Americans used to the idea that the government will save them during a national crisis. Leadership equals vision. Why is his vision focused on everything but saving human lives. That’s what every response in this interview should have been about: how do we save more lives. It’s not his positions that are the problem. It’s his priorities. Stop talking politics. Get to work saving lives.”

“I think Representative Stewart misses the mark on this one by saying it shouldn’t embarrass Trump. Trump has made some big mistakes in responding and planning for the threat of COVID-19. That has translated into more deaths, which is a tragic failure and intolerable. Trump should be held accountable for his inaction and refusal of the WHO test in February.”

“Is protecting Donald Trump from embarrassment really more important than discovering the truth?”

“Time to get rid of Chris Stewart.”

What the Stewart Town Hall demonstrated is unfortunate. I don’t like to highlight failure in our leaders. I don’t like to think about how public policy has failed to the point that people die. That said, it’s incumbent on all of us to hold our elected officials accountable when they fail or when they seem to view their job not about representing us but about protecting the leader of their party.

If a Democratic President had handled this crisis the way it’s been handled, and if I were in Congress as a Democrat, I promise you I would not sound like Chris Stewart. I would try and be respectful, but I would highlight where those failures have been, because governing is a very serious business.

As I started my campaign, sometimes people would say, “Kael, you’re so serious.” It’s true. My experience in Fallujah, Iraq, and elsewhere makes me serious about what good or bad government can mean.

Now, given everything that’s going on, it’s important that we have serious people in serious jobs. What’s more serious than trying to find solutions to a global pandemic that’s going to kill more people, unnecessarily kill people that probably wouldn’t have died if we had been more on top of what our elected officials are paid to do? Our elected officials are paid to think about worst case scenarios.

In serious times, we need serious leadership. That’s why I’m running to represent you in Utah’s 2nd Congressional District.